“Regardless of what happens in the rest of the World,China should be able to continue growing at an average annual rate of around 7%.” On Jan 22, 2015, at the 4thMaster Forum on campus at the Chinese University of Hong Kong, Shenzhen, Prof. Lawrence J. Lau, Ralph and Claire Landau Professor of Economics at CUHK and the University’s former President, delivered a lecture on China’s economy, forecasting the future development of China.

A natural first explanation is China’s highly favourable economic fundamentals and its unlimited supply of surplus labour. However, as Prof. Lau pointed out, while favourable economic fundamentals are necessary, they are by no means sufficient. For example, why did China succeed in introducing free market while the former Soviet Union failed? It turns out that the choice of strategy for the economic transition matters, said Prof. Lau, “Instead of dismantling the mandatory central plan all at once, the Chinese Government adopted the ‘Dual-Track’ approach, introducing enterprise autonomy and free markets on the margin while continuing to enforce the existing central plan.” In practice, for example, the strategic methods for economic reform can be found in the “Processing and Assembly” operations, and the flexible “New People, New Way; Old People, Old Way.”

Speaking of the successful past, will China continue to grow at a high rate in the future? Prof. Lau’s answer is still yes.

“The Chinese national saving rate will remain high and labour surplus will continue to exist for a couple of decades, as will the advantages of a huge domestic market,” he added, as the Chinese capital-to-labour ratio is still relatively low for the country as a whole, “there is therefore still a great deal of room for tangible input-driven economic growth and eventually for intangible-capital driven growth as investments in human capital and R&D capital continue to increase.”

During the Q&A session, Prof. Lau shared his views with students on various issues such as the impact of the oil price drop on China’s economy, the development trend of the Philippines economy and the issue of “middle income trap”, etc. 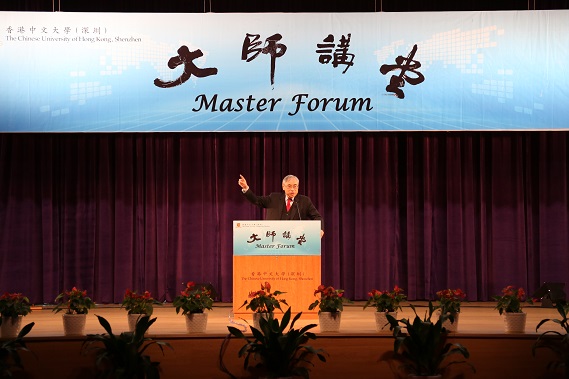