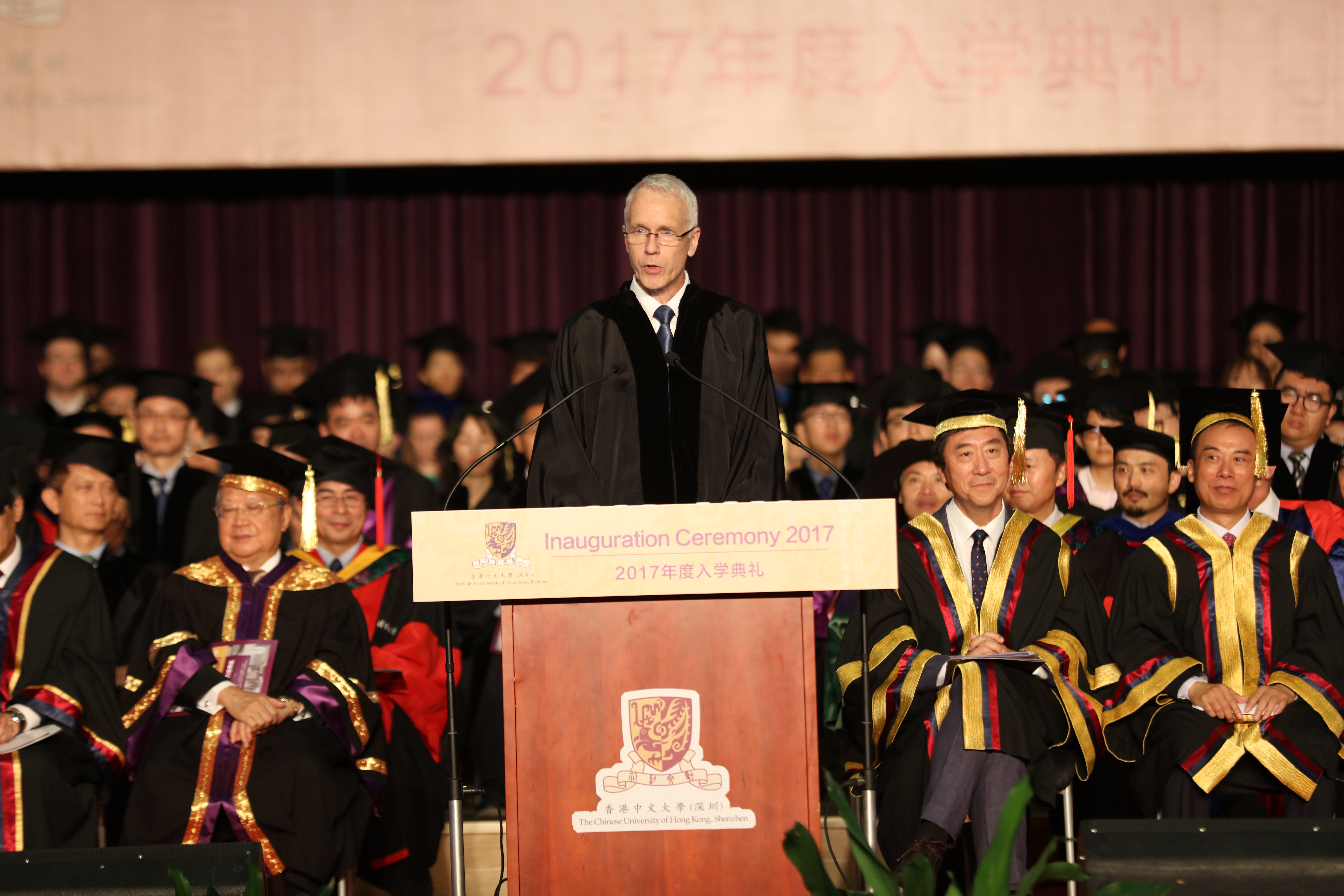 President Xu, Faculty, Students and guests. It is my pleasure to welcome the class of 2021.

The next 4 years at the Chinese University of Hong Kong, Shenzhen will lay the foundation for your future. In addition to receiving a world class education, it will be a time when you will meet and befriend people who will have a great impact on your life – both teachers and fellow students. In my case, I met my future wife, Tong Sun, on the first day of school in biology lab. Tong Sun has had the greatest influence on my life, both personal and professional.

While I don’t have any words of wisdom that will guarantee success in life. I can tell you what worked for me.

I am here because I was awarded a Nobel Prize. The Nobel Prize is recognition that I have achieved a measure of success in doing what I love. It’s very gratifying knowing that my colleagues appreciated my work enough to lobby on my behalf. However, I don’t consider myself to be exceptional in any way, and those who know me well will agree.

I believe my career to date is an example of how an average individual can achieve a measure of success by a combination of factors that include hard work, persistence, an element of luck, and a great deal of help from family, friends and colleagues. When I look back at my career I am amazed at how often I’ve been in the right place, at the right time, with the right people.

I’ve thought about my career and tried to find some message for todays entering class.

I believe four factors have played important roles in my career:

First, I found my passion, something I loved to do, and a challenging goal that I wanted to pursue.

Second, I was able to find role models and mentors who provided guidance at different stages of my career.

Fourth, I had balance in my life, that is, a fulfilling family life outside of my academic career.

My first role model was my father. Growing up in Little Falls, MN (population 7,000) I had a pretty unremarkable childhood. My parents were loving and supportive. Neither of my parents had a university education. My father owned a small bakery. My mother was a housewife and worked part time at the bakery as a cake decorator.

I don’t remember any pressure from either of my parents for me to do well academically or to enter any particular profession. I consider this one of their most important gifts to me. They gave me a blank canvas to paint my own picture, at my own pace.

As I’ve grown older I realize how much of an impact my father has had on my life. I admired his work ethic, his skills in dealing with people, his sense of humor and his devotion to his family.

His bakery was a relatively complex small business that operated 24 hours a day, six days a week, and prospered by producing a large variety of excellent baked goods. To make all of this work, my father had to be able do every job in the bakery because when someone called in sick he had to be able to fill in, day or night. He did everything from baking bread, to managing accounting and payroll, to running the dishwasher if necessary.

I believe his success was due to his versatility, work ethic, good humor, and ability to motivate people to do their best.  I have tried to emulate his approach to business in managing my research group.

I decided I wanted to become a doctor at a very early age. I saw that my small rural community held physicians in the highest regard. They were well educated, and were able to help the sick, elderly and weak in ways no one else could. I particularly admired my pediatrician.

This interest in medicine led to an interest in science in general, and I entered the University of Minnesota Duluth in the fall of 1973 to study biology and chemistry in preparation for medical school. During my first quarter I encountered my second most influential role model, my biology professor, Conrad Firling.

Professor Firling encouraged undergraduates to get involved in research, as we hope you will do, and welcomed me into his lab to work on projects in developmental biology. While he had little funding for research and had to spend most of his time teaching, he was passionate about research and very creative in his choice of projects and the use of his limited resources.

I soon found that I really enjoyed the challenge of working out relatively simple technical problems and generating data. At the same time the research topic wasn’t completely satisfying because it was primarily descriptive. I enjoyed the process, but hadn’t been very interested in the particular questions being addressed.

At Yale, all medical students were required to write a thesis based on original research. For my thesis project, I studied the genetic diversity of rotavirus, a common cause of gastroenteritis in children. Again the project was largely descriptive, and not very fulfilling. However, being at Yale I was exposed to research from internationally recognized scientists from a broad range of disciplines.

I began to see that if I could devote enough time to research, I could try to answer important biological questions at a mechanistic level and in molecular detail. It was at this time that I decided I wanted to explore research as a career. However, this opportunity would have to wait.

During my clinical training at Barnes Hospital, I became particularly interested in intensive care medicine. Patients admitted to one of the intensive care units were typically very unstable requiring urgent intervention, often with medications acting on several different G protein coupled receptors, a special class of proteins that would ultimately become the focus of my research career.

Drugs acting on G protein coupled receptors were used to control blood pressure and heart rate, and relieve pain. My interest in intensive care medicine led me to apply for cardiology fellowships. I was particularly interested in the program at Duke University, which allowed fellows to work for several years in a basic research lab before completing their clinical training.

Moreover, the laboratory of Prof. Robert Lefkowitz at Duke, with whom I shared the Nobel Prize, was doing pioneering research on the G protein coupled receptors that respond to adrenaline, giving me the opportunity to explore basic research in an area relevant to cardiovascular and intensive care medicine.

My first few weeks in the Lefkowitz lab were a bit awkward and hard on my self-esteem. I went from being an experienced and competent physician to a novice among a group of very talented and experienced young scientists.

During the first months in the lab, while learning basic techniques, I became aware of the effort to clone the gene for the b2 adrenergic receptor (b2AR). This was exactly the kind of project I was looking for. It was the chance to isolate the gene for one of the G protein coupled receptors I had been targeting in patients in the intensive care unit. It was a chance to begin to learn how one of these proteins worked at the molecular level.

For the next two years I struggled to learn molecular biology and all of my efforts to isolate the gene failed. While Bob Lefkowitz was not an experienced molecular biologist and couldn’t help me with the experimental details, he was a great motivator and gave me the impression that he believed I would succeed. He taught me that it is ok to try and fail, as long as I leaned something in the process.

We finally succeeded in isolating the gene for the β2AR in 1986. This was a scientific breakthrough that gave us the first piece of the puzzle that would ultimately reveal how G protein coupled receptors work. I knew at that time I wanted to see the whole picture, how all of the proteins fit together in molecular detail. In 1986 I found my passion, and began pursuing the goal that would form the basis of my career for the next 30 years.

In 1990 I started my lab at Stanford and continued to work on this very challenging project. Seventeen years later, in 2007 my lab obtained the crystal structure of the β2AR providing another important piece of the puzzle. In 2011 we were able to complete the puzzle with a crystal structure the β2AR activating its cytoplasmic signaling partner. I owe these scientific achievements to the hard work of many talented students and postdoctoral fellows, and collaborators from around the world.

I have benefited from mentorship, advice and collaborations with colleagues from a broad spectrum of disciplines. I have been particularly privileged that my wife Tong Sun has worked with me in the lab on and off for more than 30 years providing technical, intellectual and emotional support.

My career in research has been very rewarding from several perspectives: discovering new knowledge, working with many brilliant and often intimidating students and postdoctoral fellows, developing friendships with scientists throughout the world, and perhaps most important, having the flexibility to spend time with my family.

While my career path led to basic biomedical research, yours may lead in a different direction.

The world is facing many challenges including:

The threat of nuclear confrontation with North Korea

Climate change: This is perhaps our greatest challenge. While we may end wars, prevent a nuclear confrontation, and reduce world poverty, climate change may be irreversible. My generation has ignored the threat of climate change leaving the problem to your generation. Unfortunately, the president of the United States is failing to provide leadership for the rest of the world. Addressing climate change will require a concerted effort from creative individuals from different disciplines including scientists, engineers, educators and politicians.

I hope that some of you will consider careers that will help address these challenges.

In closing, I wish you success in the next four years as you lay the foundation for your future.