The 2017 International Workshop on Mathematical Issues in Information Sciences was held at the Chinese University of Hong Kong, Shenzhen on the morning of December 15. The workshop was co-organized by the Shenzhen Research Institute of Big Data  ("Institute") and CUHK-Shenzhen, and sponsored by Tencent. Professor Yangsheng XU, President of CUHK-Shenzhen, Professor Tom Z.Q. LUO, Vice President of CUHK-Shenzhen and Director of the Institute, and Guangwen CHEN, Deputy District Chief of Longgang District, Professor X.Q. CAI, Associate Vice-President of CUHK-Shenzhen and Vice Director of the Institute, Professor Stephen Boyd, Professor of the School of Science and Engineering of the university and Expat Academician of the Chinese Academy of Engineering, together with representatives from famous universities home and abroad, attended the opening ceremony. The workshop lasted from December 14 to 17. More than 20 experts from the industrial and academic circles gave speeches and discussed on the cutting-edge issues of data science, including network security, machine learning, depth vision research, medical big data processing and other hot topics. 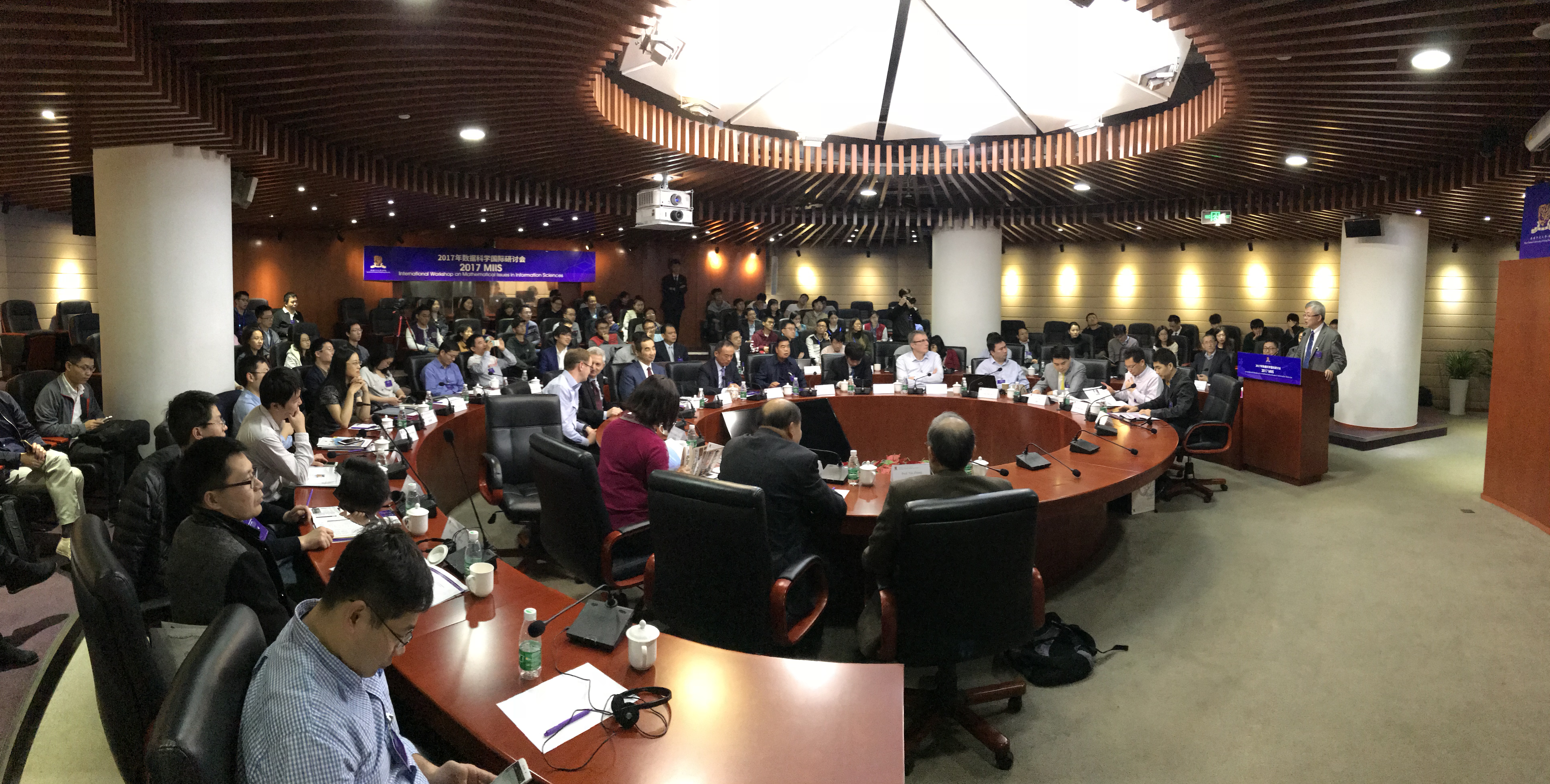 At the opening ceremony, on behalf of the university, Professor LUO delivered a welcome speech and introduced the development of the University since establishment. In the past four years, the university has recruited more and more outstanding faculty members from all over the world while the quality of students, the infrastructure and the campus environment have also been improved greatly. Professor LUO sincerely invited the scholars present to join the University. Shenzhen’s active atmosphere of innovation in industry-university-research cooperation cooperation, especially that of the University, will enable us to score greater progress in data science. In response to the strategy of Great Bay Area of Guangdong, Hong Kong and Macao, Professor LUO believes that the Institute should join hands with universities in Hong Kong and Guangdong Province to integrate research and data resources to further expand the influence of the Institute to the entire Bay Area. The University will also cooperate with other universities to explore the best ways to train talents who can contribute to innovation in the Bay Area and the regional development of industries. The Institute has launched the Master of Science in Data Science Program, a joint program provided by the School of Science and Engineering and School of Management and Economics, with more than 20 students enrolled as the first batch. During one and a half years of study, students will join in the researches of the Institute to realize the industry-university-research cooperation ,apart from attending classes. 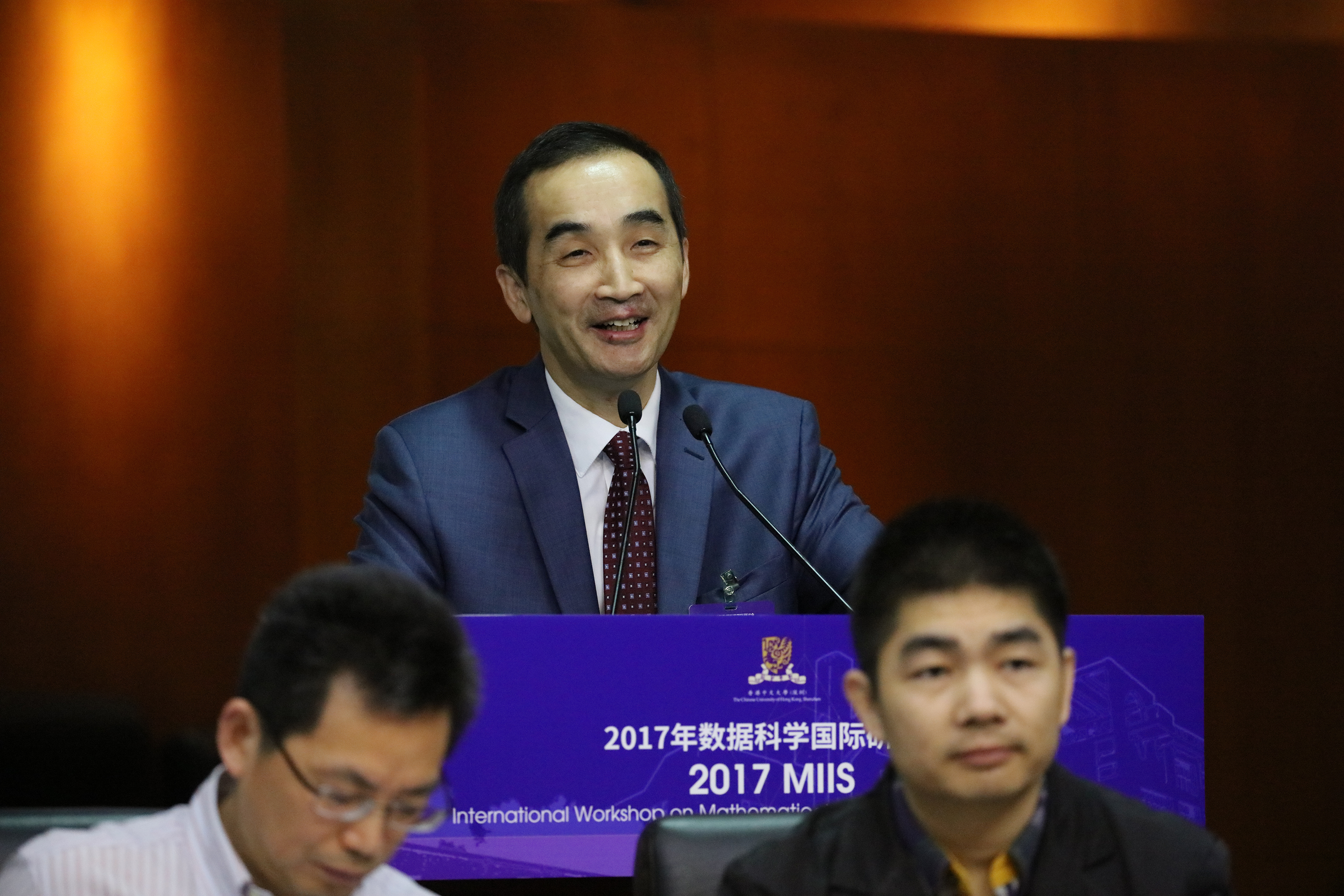 In the meantime, the Institute has also achieved excellent results in cooperation with industry and has partnered with many well-known corporations, such as Tencent, Huawei, Luohu People's Hospital and so on. Two projects have been completed in cooperation with Huawei, including automatic fault monitoring and diagnosis in the field of communications networks and core algorithms for residential copper cable cabinets. Both projects have been put into operation. The Institute and enterprises will maintain long-term cooperation and actively carry out new projects. In addition, the Institute also actively carries out cooperation with the government. The Institute and Longgang District government have cooperated to build the smart city. The rationalization of resource distribution can be realized through sharing data in health care and education with the Longgang Data Service Office. The Learning Analytics System developed by the Institute has also been put into operation in the University. The system can understand students' situation and needs and then customize study plans and recommend better ways to learn for student by analyzing the data it collects in campus. Professor LUO points out that the data collection and standardization should be better implemented in the future development of the big data industry, and more efforts should be made to form a complete guidance system. With National Natural Science Foundation of China's support, the Institute has continuously promoted the research and development of big data in cooperation with prominent universities at home and abroad, as well as enterprises and institutions from financial, communications and medical fields. In less than two years, the Institute has gained international recognition. Speaking of the similarity between Shenzhen universities' role in promoting the Great Bay Area of Guangdong, Hong Kong and Macao and the role of US universities in the San Francisco Bay Area, Professor Stephen Boyd said that "The innovation of Silicon Valley in the San Francisco Bay Area is mainly driven by Stanford University and the University of California, Berkeley. Shenzhen reminds me of Silicon Valley. Both places have a lot of talented young people who have the potential to change the world. For the future of the Great Bay Area, building a world-class university is undoubtedly of great significance to the development of Shenzhen. The University and Stanford University also have some similarities. Stanford University doesn't have a long history. But it develops in a rapid speed with strong ability to innovate. That's also the case for the University." And that's exactly what attracts Professor Stephen Boyd to come to the University. "The development of research universities needs talents with practical skills and a good atmosphere of innovation and entrepreneurship. So Shenzhen is the ideal place to build such a university. The University brings together forward-looking talents who are passionate about putting theory into practice and inventing. Shenzhen has plenty of opportunities in engineering and high-tech research, and the ability to quickly put the research results into practice." Stephen Boyd said. Having been in close contact with China since 1984, Stephen Boyd said frankly that over the past 30 years he has witnessed many wonderful changes in China. And now in Shenzhen, everything happened in the University excited him and he believed that there will be increasing numbers of world-changing innovations. 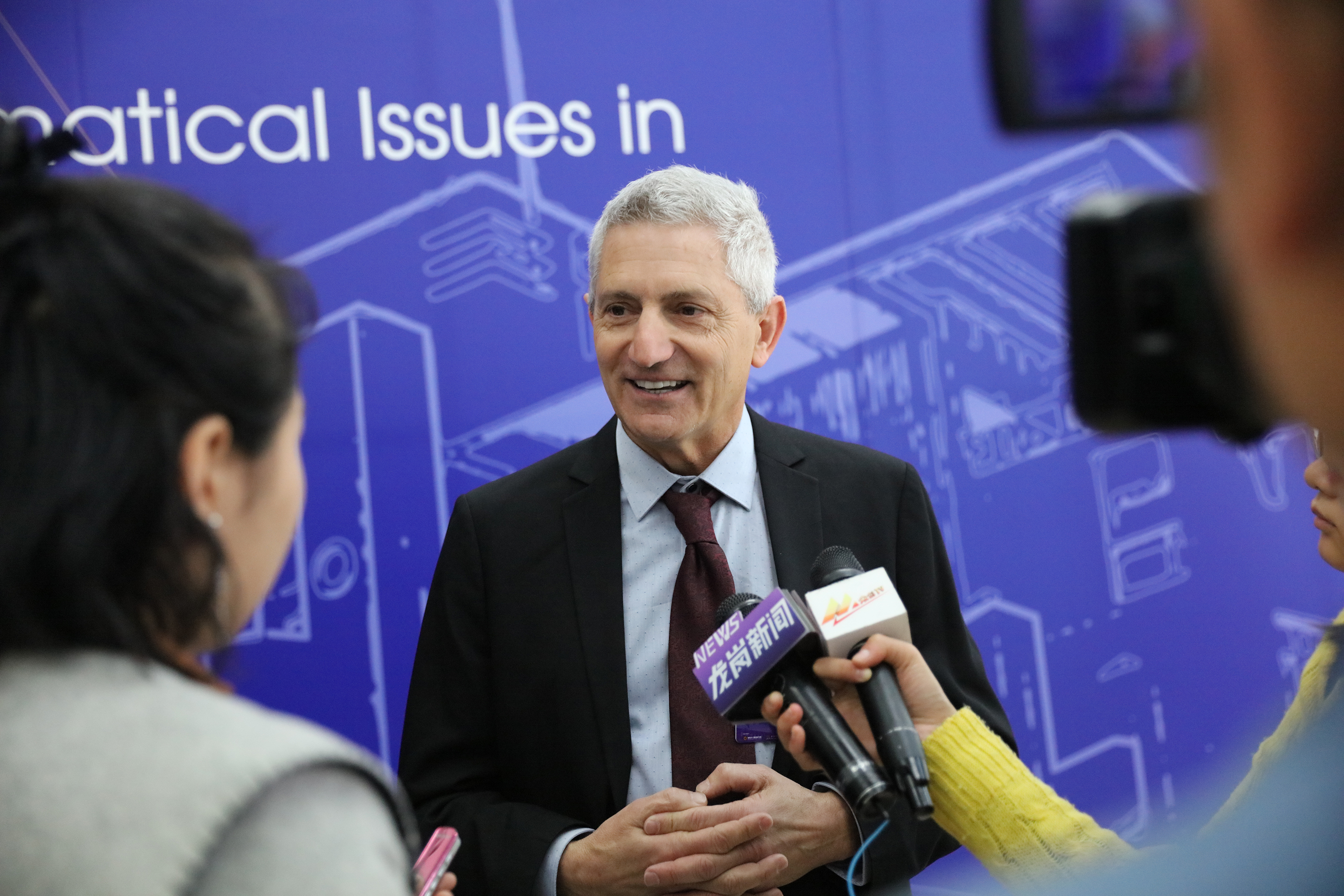 With the support of Shenzhen Municipal Committee and Shenzhen Municipal Government, relying on the academic support of the University, the Institute was established in March 2016 to integrate and lead the big data related industries and research projects in Shenzhen. The executive team of the Institute consists of world-renowned data scientists who have extensive experience in information processing, data analysis and industrial cooperation. The initial research team consists of 1 Nobel laureate, 3 academicians, 2 National 1000-Talents Program experts, 2 experts of the National Science Fund for Distinguished Young Scholars. All the team members have a doctoral degree and overseas experience, and have made progress in the optimization theory and algorithm design, machine learning, large-scale data processing, statistical signal processing and other fields. By 2017, over a year's development, the Institute has more than 40 members and 3 administrators. As a whole, the administrative team and research team of the Institute have begun to take shape and have already been able to play an effective role for current operation. 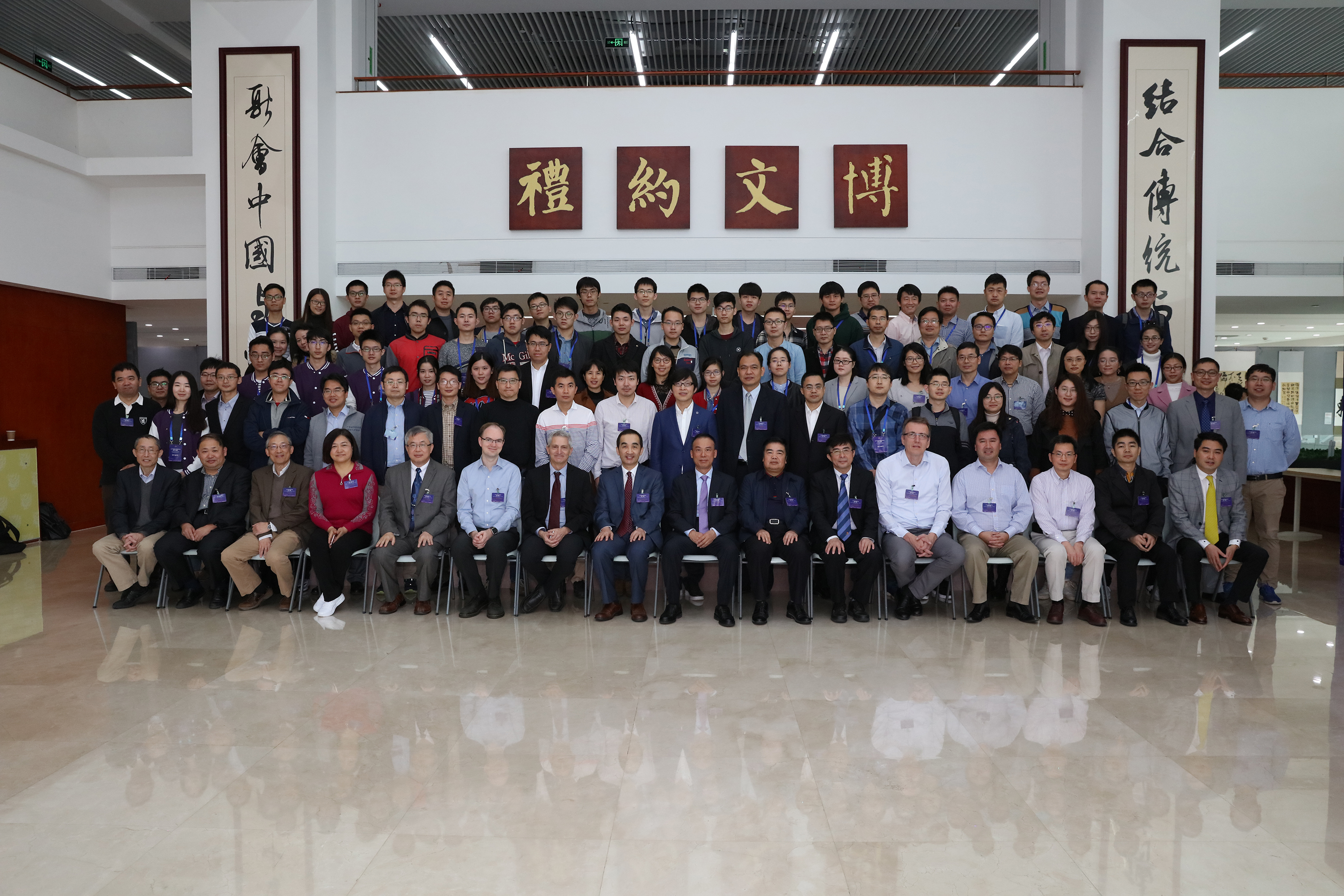