The data of the Clarivate Analytics list comes from the Essential Science Indicators (ESI) database on the Clarivate InCites platform and the academic research platform Web of Science. Papers and total citations published in the past 10 years (2008-2018) are included in the statistics. The highly anticipated list identifies scientists and social scientists who produced multiple papers ranking in the top 1% by citations for their field and year of publication, demonstrating significant research influence among their peers. Professor David Zhang is a Presidential Chair Professor at the School of Science and Engineering, The Chinese University of Hong Kong, Shenzhen and the Director of Shenzhen Institute of Artificial Intelligence and Robotics for Society. David Zhang graduated in Computer Science from Peking University. He received his MSc in 1982 and his Ph.D. in 1985 in both Computer Science from the Harbin Institute of Technology (HIT), respectively. From 1986 to 1988 he was a Postdoctoral Fellow at Tsinghua University and then an Associate Professor at the Academia Sinica, Beijing. In 1994 he received his second PhD in Electrical and Computer Engineering from the University of Waterloo, Ontario, Canada. From 2005 to 2018, he has been a Chair Professor at the Hong Kong Polytechnic University where he is the Founding Director of Biometrics Research Centre (UGC/CRC) supported by the Hong Kong SAR Government.

Prof. Zhang is both the Founder and Editor-in-Chief of International Journal of Image & Graphics (IJIG) and Springer International Series on Biometrics (KISB); Distinguished Speaker of the IEEE Computer Society; and a Fellow of both IEEE and IAPR. Over the past 30 years, he has been working on pattern recognition, image processing and biometrics, and is a founding researcher in palmprint recognition, computerized TCM and facial beauty analysis. So far, he has published over 20 monographs, 400 international journal papers and 40 patents from USA/Japan/Mainland and HK SAR, China.  His research achievements have won many awards, such as the Invention Gold Award and Special Gold Award from China and South Korea, the Silver Invention Award from Geneva's Invention Expo, and the "Chroucher Senior Research Fellowship" Award (Highest Science and Technology Award of Hong Kong Special Administrative Region, China). He has been continuously listed as a Highly Cited Researchers in Engineering by Clarivate Analytics (formerly known as Thomson Reuters) in 2014, 2015, 2016, 2017, 2018 and 2019, respectively. He is also ranked about 80 with H-Index 103 at Top 1000 Scientists for International Computer Science and Electronics. 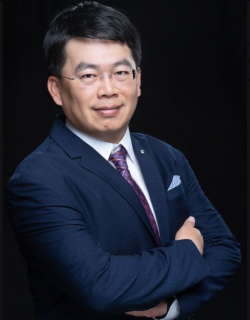 Hsien-Da Huang is a Professor at the School of Life and Health Sciences & the Executive Dean of the Arieh Warshel Institute of Computational Biology, The Chinese University of Hong Kong, Shenzhen. He received Ph.D. at the Department of Computer Science and Information Engineering, National Central University, Taiwan, in 2003. He was a Chair Professor and Vice Dean at the College of Biological Science and Technology, National Chiao Tung University, Taiwan. During 2009-2016, he was the Chairman at Department of Biological Science and Technology, NCTU. He was also the President of Taiwan Society of Bioinformatics and Systems Biology (2014-2017).