The 2016 Nobel Prize in Physics was awarded to three theoretical physicists for their discoveries of topological phase transitions and topological phases of matter, which highlights the role and significance of topology in understanding the physical world. In the field of magnetism, topology is also directly related and fundamental to the physics of an exotic magnetic texture, namely, the magnetic skyrmion. 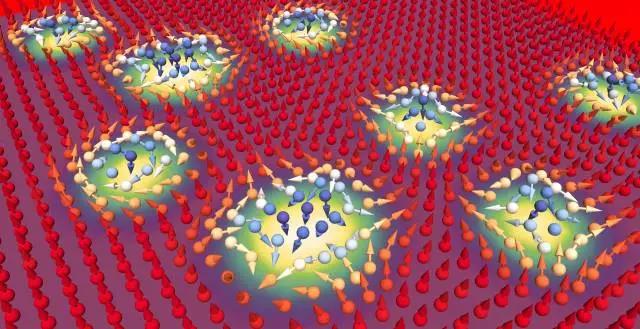 The discovery is reported this week in the prestigious journal Nature Communications, in a paper by CUHK(SZ) research assistant Xichao Zhang, and Ph.D. student Jing Xia, and four others from Shenzhen University, China, Shinshu University, Japan, and the University of Tokyo, Japan.

“Helicity is a degree of freedom of frustrated magnetic skyrmions,” says Xichao Zhang, the first author of the study. “In conventional ferromagnetic materials, the helicity of a skyrmion cannot be effectively controlled, while we find it is possible to control the skyrmion helicity by utilizing the helicity locking-unlocking transition in frustrated magnetic materials,” Zhang adds that the control of helicity can lead to novel spintronic applications such as the helicity-based skyrmionic memories.

“Our study also shows the interactions between frustrated skyrmions and antiskyrmions, which are problems of both theoretical and practical significance,” explains Yan Zhou, associate professor of CUHK(SZ). Prof. Zhou says, it is also possible to build logic computing devices based on skyrmions and antiskyrmions, and his group is pursuing this currently. This research project was financially supported by the National Natural Science Foundation of China, the President’s Fund of the Chinese University of Hong Kong, Shenzhen, the Shenzhen Fundamental Research Fund of the Shenzhen Science and Technology Innovation Commission, and the Longgang District Government. Prof. Zhou also adds the research projects carried out in CUHK(SZ) are also strongly supported by university and department leaders, administrators, and technicians. The international cooperation platform provided by the university is beneficial for all researchers and students to obtain collaborative research outputs.