The establishment ceremony of the Institute of Urban Underground Space and Energy Studies (IUSE) at The Chinese University of Hong Kong, Shenzhen was held on the morning of November 25, 2020, in conjunction with the Strategic Research Forum on the Development of Hot Dry Rock in Southeast Coastal Economically Developed Areas. The Institute of Urban Underground Space and Energy Studies (IUSE) is a secondary institution of The Chinese University of Hong Kong, Shenzhen, with Jishan He, an academician of the Chinese Academy of Engineering, as its founding director. Currently, the Institute has identified four major research areas led by eight invited academicians and professors. Boasting a management and operation model that is in line with international standards, IUSE is committed to providing strong scientific and technological support for the development of the Guangdong-Hong Kong-Macau Greater Bay Area into a vibrant world-class city cluster and an international center of science and technology innovation with global influence. Prof. Shuguang Cui, Dean of SSE, presided over the ceremony and the conference

As academician Jishan He suggested in his remarks, resource shortage and energy scarcity has become a bottleneck restricting the economic and social development of countries, while energy mix adjustment and optimization constitute the primary issue to overcome related constraints. With abundant reserves and massive potential for application, geothermal energy is a green, low‐carbon, and stable solution to this conundrum. Therefore, the Institute has taken the development and utilization of dry hot rocks in the economically developed areas of the southeast coast as one of its important research fields.

In general, the Institute will make full use of the regional advantages of the Guangdong-Hong Kong-Macao Greater Bay Area to carry out comprehensive research on the prevention and control of urban underground space security, urban strategic energy reserves, exploration and development of strategic materials for marine cities, and intelligent sensing detection systems. It aims to evolve into an internationally influential academic research center and comprehensive research platform of theoretical research, instrument development and pilot applications, through leveraging Shenzhen's industrial and human resource advantages in electronic information, big data, cloud computing and other industries, and exploring urban underground space, geothermal energy and marine resources in the city and the Greater Bay Area at large. 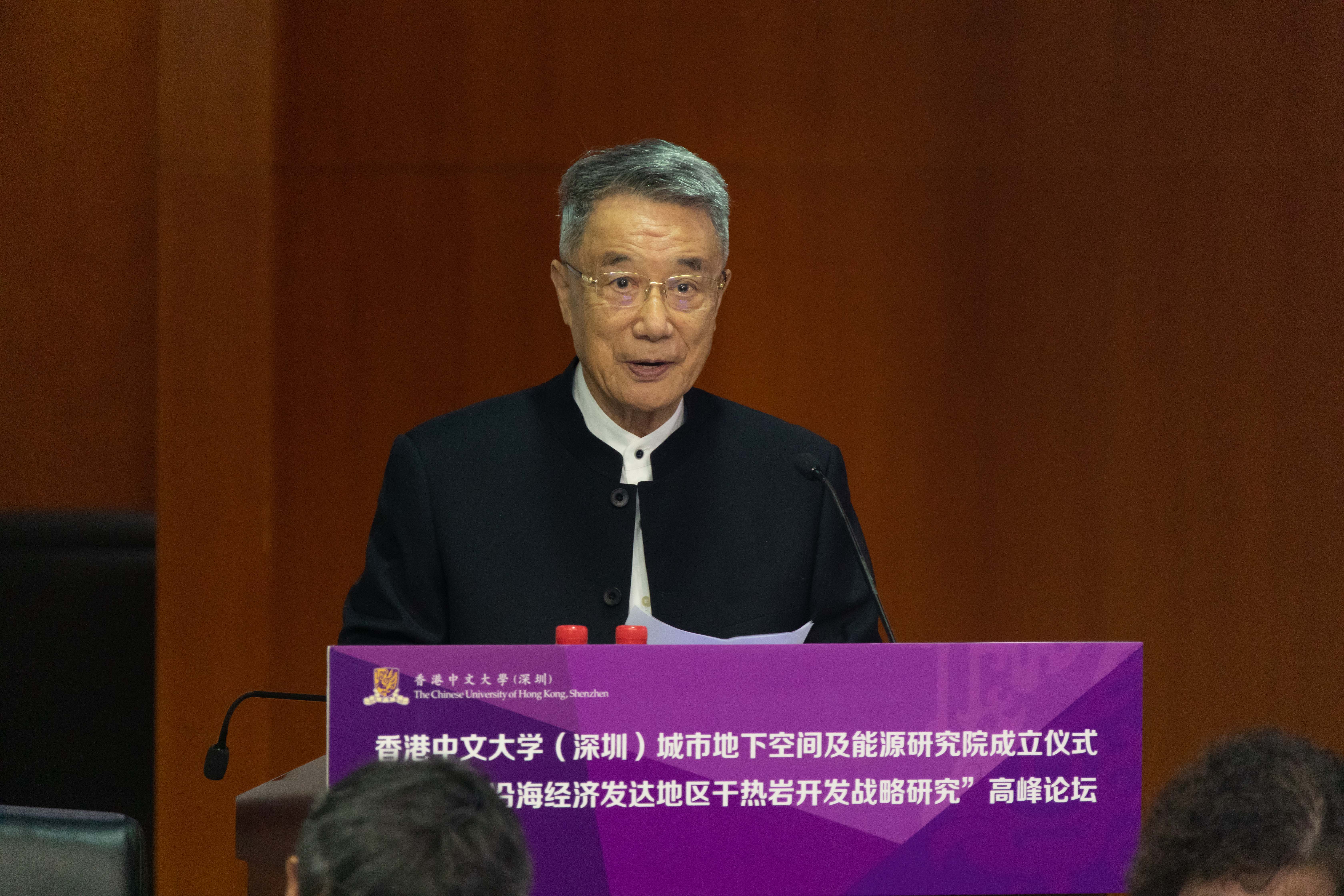 Prof. Jishan He, Dean of Insititute of Urban Underground Space and Energy Studies addressed the audience

Following the establishment ceremony, experts and professors from several universities delivered keynote speeches for the concurrent Strategic Research Forum on the Development of Hot Dry Rock in Southeast Coastal Economically Developed Areas. Geothermal energy studies, with the development and utilization of dry hot rocks as its cornerstone, is an important direction for future energy research as recognized by the Ministry of Science and Technology and the Ministry of Education, among other national authorities. In view of China's rich and promising dry hot rock resources, faster development and utilization of this energy source will greatly promote energy restructuring, reduce greenhouse gas emissions, and improve the environment. Experts believe that the organic combination of underground space exploration and research with big data research and IoT will strongly impel the construction of smart cities and transparent earth. As this energy source is only in the early stage of exploration and development in China, there is considerable potential to be explored, including the development of High Pressure, High Temperature (HPHT) and the utilization of waste heat.